- Updating you on what's going on

Beginning in January 2014, an investigation conducted by DIF, in conjunction with the Department’s Division of Insurance Agent and Agency Services' Bureau of Investigation, alleged that Alina Del Prado submitted an insurance agency license application for Quality using a licensed agent’s name and license number unbeknownst to the agent. The Division's Bureau of Investigation conducted an inspection of the agency, which discovered that Del Prado, unlicensed at the time, was using the agent’s name and license number to fraudulently transact insurance business in numerous instances.

The Florida Department of Financial Services’ Division of Insurance Fraud (DIF) announced the arrest of Lisa Dwyer, 49, a formerly licensed insurance agent employed by Southeast Insurance Agency in Davie, after she allegedly stole more than $20,000 in premium funds from her clients.

During an eight month window of time, the owner of Southeast Insurance Agency discovered that one of his agents, Lisa Dwyer, had misappropriated, or stolen, insurance premium payments from his company’s customers. The owner fired Dwyer and reported her actions to the Division of Insurance Fraud.

An investigation led by DIF in concert with the Department’s Division Agent and Agency Services' Bureau of Investigation revealed that more than 50 customers had some, if not all, of their premium checks stolen by Dwyer, for a grand total of just under $22,000 in insurance premium funds. According to Dwyer, much of the stolen funds were kept for her own personal use, but she claims to also have used some of the premiums to make payments on a few of the insurance policies. The Division of Agent and Agency Services revoked the agent's license in February, 2015.

Chief Financial Officer Jeff Atwater announced that the Department of Financial Services will host a free financial safety workshops next month in Fort Pierce and St. Augustine. Operation S.A.F.E. or Stop Adult Financial Exploitation workshops teach seniors, their families and caregivers how to spot a scam, how scams work and the steps they can take to protect themselves. 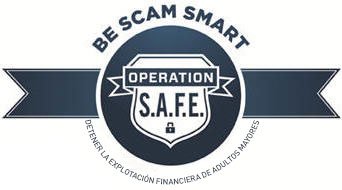 These workshops are hosted as part of CFO Atwater’s ‘On Guard for Seniors’ initiative, launched in 2012 to educate seniors about financial topics such as annuities, identity theft, reverse mortgages and long-term care insurance. The workshop will focus on frauds and scams, such as fake lotteries and repair scams, and how these scams work on the psyche to convince seniors to take a chance on something that is too good to be true.

The Florida Office of Financial Regulation (OFR) announced the unsealing of a federal grand jury indictment against Timothy M. Roberts and Terrance F. Taylor. The indictment charges each man with one count of conspiracy to commit wire fraud and five counts of wire fraud, stemming from their role in an alleged investment fraud scheme.

“Fighting financial fraud is one of the Florida Office of Financial Regulation’s highest priorities,” said OFR Commissioner Drew J. Breakspear. “The OFR will continue to collaborate with our partners to protect Floridians from financial fraud.”

“Thank you to our partners in the Federal Bureau of Investigation, the U.S. Securities and Exchange Commission in Miami and the U.S. Attorney’s Office in Tampa for their hard work in this case,” said OFR Deputy Chief of Financial Investigations Alex Toledo.

Roberts and Taylor operated Ybor City-based Savtira Corporation, Inc., a supposed internet technology company that purportedly offered centralized, cloud-based shopping cart platforms for retailers to sell goods. Both men are alleged to have sold stock in Savtira, raising approximately $5.3 million from investors. The joint investigation by the OFR and the Federal Bureau of Investigation (FBI) revealed that the stock certificates sold to investors were essentially worthless and that the money was used by both men for personal expenses. Roberts and Taylor are also alleged to have generated fake invoices and receivables, to make it appear as if Savtira had millions in revenue.

If you are a victim of financial fraud or to report suspicious activity, file a complaint online at www.flofr.com or call (850) 487-9687.

The Florida Division of State Fire Marshal (SFM), which operates under the direction of Chief Financial Officer Jeff Atwater and the Department of Financial Services, announced the arrest of Delmar Dice, 50, for allegedly attempting to burn down his own home and causing nearly $200,000 in damage.

On September 4th, the Skyline Fire Department and the Santa Rosa County Sheriff’s Office requested the assistance of the SFM at a fire that occurred on Happy Hollow Drive in Milton, Florida. Upon arrival, the home was entirely engulfed in flames while the owner, Delmar Dice, was on scene and looked upon his scorched home in despair.

After the flames subsided, the SFM’s local accelerant detection K-9 Bailey went to work by attempting to identify and locate any accelerants that may have been used in the fire. During her analysis of the scorched structure, Bailey was able to pin point the use of accelerants in the garage of the home. Detectives were then able to verify that the fire had initially started in the garage and that some type of accelerant had been used.

Office Approves Removal of Up to 184,500 Policies from Citizens

The Florida Office of Insurance Regulation (Office) has issued an Order establishing the 2016 commercial lines rates for Citizens Property Insurance Corporation (Citizens). The effective date for both new and renewal rates within the Commercial Lines and Coastal Accounts is February 1, 2016.


Make Sure You Don't Miss Important Information From Us

We highly recommend that licensees routinely check their Mi Perfil account(s) for messages from the Department. We send an email notification at the same time to remind you to check your Mi Perfil account but on rare occasions you may not receive that email. For that reason, we suggest you add our domains dfs.state.fl.us y MyFloridaCFO.com to your email software's Trusted or Safe Senders List to ensure you are able to receive email notifications from us. Licensees who have a valid email address on file with the Department, as required by law, are sent important email notifications when something that affects their application, license, continuing education, or appointment(s) occurs. Additionally, we will keep you informed with warnings regarding new schemes and scams being marketed to licensees. You can update your contact information through your Mi Perfil account. We want to keep you informed in a timely manner of pertinent information. You are still required to abide by the Florida Insurance Code regardless of whether you read the information we provide or attempt to provide.